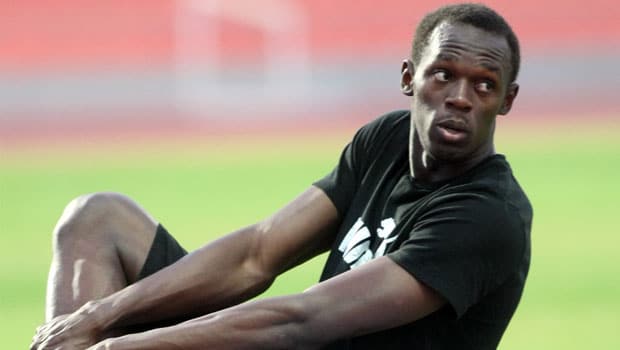 It’s been no secret in the sporting world, that since his amazing achievements at the Olympic Games, the Jamaican sprinter Usain Bolt, has been angling for a chance to pull on a Manchester United shirt. Bolt became a double triple, Olympic Gold medallist at London 2012 and quite rightly it seems the world is now his oyster.

He has made no secret of his love for Manchester United and his desire to play for them, the top class athlete would love to appear in a top flight football match. 26 year old Bolt, could now make the transformation from the flying sprinter, into a super striker for Manchester United. There were some far fetched rumours that claimed he would be given a trial at Man Utd however Sir Alex Ferguson has said “[Usain is] a bit of a character and a big United fan. But it’s interesting he says he would like to play in a charity game. It could be brilliant, and next year, when we play Real Madrid’s Legends again, there could be opportunities to bring him in and see how he does.”

Okay! before we all get over excited at the prospect of Usain Bolt playing for Manchester United, this game is only a friendly and the guy is only making a guest appearance. But you would have to have something wrong with you, if your mouth doesn’t water at the prospect of watching this wonderful athlete perform on the football pitch. Apparently Bolt has helped his favourite team out in the past, helping to improve Cristiano Ronaldo’s sprinting. Sir Alex should get his skates on, Bolt has also been linked with a possible switch to cricket, his close friend West Indies batsman Chris Gayle, recently said, ” he wouldn’t embarrass himself. In a charity game, he actually played against me and almost knocked my head off with a good competitive bouncer”.

Bolt is certainly not short on opportunities and if all else fails [very unlikely] the avid DJ, who appeared at a couple of gigs during London 2012, could try spinning the records, as a change from breaking them!

America Does A ‘Devon Loch’ At Ryder Cup
Scroll to top