The decision to put former England international Gareth Southgate in charge of the side he once played for certainly split opinion throughout the country. While some saw how it made sense through him spending the previous three years as head coach of the England U21 side, others were blown away by an arguably uninspiring name being pushed into one of the most high-pressure jobs in world football.

Opinions, however strong or uncertain, come out in all shapes and sizes from the vast number of football fans on social media. It’s interesting to investigate what most of these fans expect from the England national team they so freely berate and scrutinise. FootyAccumulators are best known for their ability to post out football betting tips, recommended bets, and previews on a daily basis but they also keep tabs on the changing mood of the Three Lions faithful. They did that again recently, where they asked questions on exactly what is seen as being an acceptable standard from Gareth Southgate and England at World Cup 2018.

Can England Go All The Way?

Due to the mandatory patriotism that comes hand-in-hand with supporting your home nation at the World Cup, the answer to this question can be saturated in biased responses. That made us assume that the result would be a clear landslide in the outcome whereby England reach the final. Whether it was down to a feeling of negativity towards the England players and manager, or an attempt at being realistic when considering England’s previous attempts, envisioning them as World Cup 2018 finalists was far from the case. 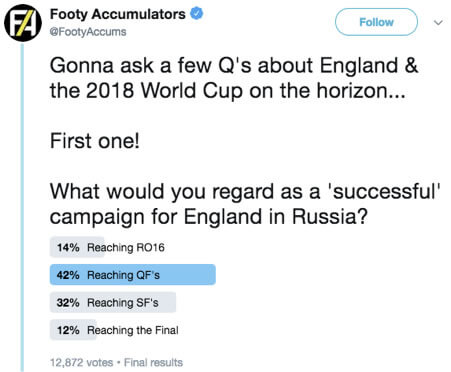 What Happens To Gareth Southgate?

Assuming England are able to make it past the group stages, FootyAccums saw the round of 16 as being the earliest possible opportunity for the Three Lions to depart the tournament. That being said, the last edition of the competition had England finishing bottom of their group behind Costa Rica, Uruguay and Italy in yet another World Cup that’s best forgotten. Gareth Southgate is used to such disappointment, as proven in his infamous penalty miss that had England narrowly losing their Euro 96’ semi-final tie with Germany.

He didn’t have the best start to life in the world of football management either. Gareth Southgate took over from Steve McClaren at Middlesbrough, who coincidentally left The Riverside to become England manager. His first two seasons saw promising twelfth and thirteenth place finishes before shockingly relegating the club in his third and final season, creating the key reason why so many England fans are sceptical of him in charge of the country’s national side.

Odds for the next potential England manager are currently unavailable on most bookmaker websites but it looks as if that could be set to change after the World Cup if these stats are anything to go by, with around 2,945 followers out of 6,267 thinking it would be time for Southgate to move on if England only make it as far as the round of 16. Although that’s almost half of the people who voted in poll number two, there was still a larger number of people who see the current situation regarding the England setup as a work in progress, with 53% voting to allow him to stay on for future years. 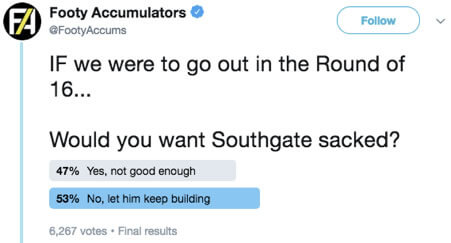 In a reality where the England boss is relieved of his duties after the World Cup, or one where he stands down from his post, FootyAccumulators wanted to see what criteria the ideal replacement would fill. Out of the four possible options, Gareth Southgate fits best into the third option; Achieving a mere 7% of the vote is a clear indication of how he fares in the estimations of Three Lions fans.

Remaining options saw more of a fight – a manager with previous international experience surprisingly getting 25% of the vote despite making the most sense, a manager with vast experience in English leagues gaining 30% of the vote – but a well-known international name being crowned winner with 38% of the vote. This proves just how many England fans want a big name in charge of their national side, which is to be expected, especially after the Football Association started heading that way with appointments like Sven-Goran Eriksson and Fabio Capello. We’ve seen less of that since, instead opting for sensible homegrown options. 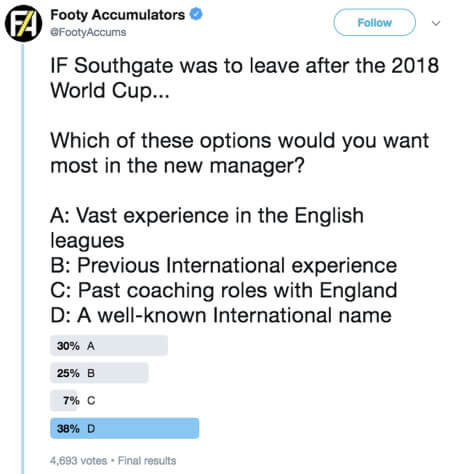 Working as a second part in the line of questioning surrounding exactly what the dream England manager would look like, FootyAccums then asked their social media followers if it mattered whether or not this coach was English. It was assumed that a larger portion of England fans would want their ideal manager to be English or at least British, but a far greater number of votes opted for the results and success doing the talking rather than the birthplace of this hypothetical candidate.

It’s almost impossible to imagine a Scottish, Welsh or Northern Irish manager in charge of the England national team, mostly down to age-old rivalries, but if somebody with past success and proven ability came knocking, it’s hard to foresee all too many England fans refusing their services. 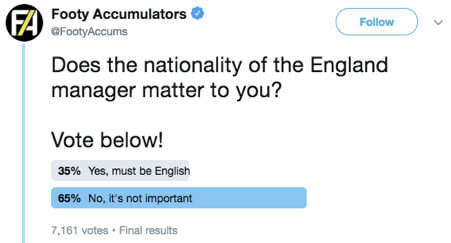 Questions regarding player respect towards representing their home nation are asked frequently in the modern era, especially by older football fans who look back lovingly to a time where practically every dimension of the game was different. It would seem that footballers are under far more scrutiny these days than ever before – something we saw predominantly through Raheem Sterling’s gun tattoo, which stole headlines and divided opinion for several days – but putting it down to them being more careless and less grateful is how a lot of people bypass being called up on being overly harsh to our homegrown heroes.

While plenty of voters toyed with options which stated that England’s players care around the same amount or don’t care as much at all, the option to claim that they care more only received 5% of the vote. That consists of just 249 people out of the 4,984 who voted, showing just how little faith these football fans have in their players caring about pulling on the famous Three Lions shirt. The most glaring of results was the sheer level of people answering that they don’t believe England players care about playing for their home nation as they did in past years, with a whopping 74% of the vote being for option three. 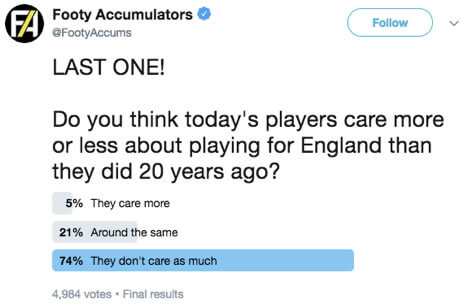 What Do Football Fans Expect From Gareth Southgate And The England National Team?

Following on from seemingly endless heartbreak and disappointment, it’s no real surprise to see that England fans have an overall feel for what they want out of England, and the bare minimum they’d expect from the national manager. Lots of football fans will be betting on the World Cup not only during it but also in the run-up, as there’s plenty of different options for doing exactly that. These bookmakers don’t all have extensive markets on who could take the job if Gareth Southgate stepped aside or even specials on how early England might fall out of the tournament. It could be a missed opportunity for some of the more negative punters but it’s yet another sign that everyone’s jumping on the bandwagon like they always do, even if their chances might be slim against the likes of Brazil, France, Germany and Spain.

The reality of what football fans want is a finish in at least the quarter-finals, as long as there’s clear foundations for the direction this young, promising side is heading in. If this exercise in trying out someone with knowledge of coaching England doesn’t work then the best course of action is to move on to a big name, regardless of nationality, that will keep morale up if nothing else. The final answer is a tough one to deal with, as you can’t prove whether or not a footballer cares about playing for his home country in the same way that it’s hard to alter how they change that mentality. All you can do is get behind these players in hope that this attempt at success is the best we’ve seen for several decades. If the most-part of England fans are anything to go by, it looks as if Southgate and co might be on to something.