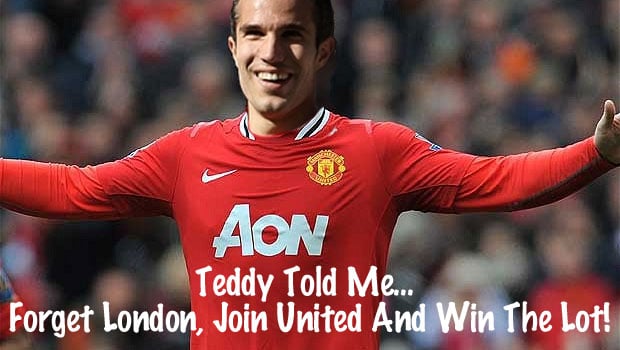 It seems that the Robin Van Persie transfer saga is finally coming to an end. News filtered out from the Emirates today that RVP is set to join Manchester United for a fee of around £22m, subject to a medical at Old Trafford on Thursday morning.

The announcement was confirmed when United released a statement on it’s website manutd.com: ‘Manchester United is pleased to announce it has reached agreement with Arsenal Football Club for the transfer of Robin Van Persie.’

‘The deal is subject to a medical and the agreement of personal terms. A further announcement will be made in due course.’

The news has United fans salivating at the prospect of watching the Premier Leagues two leading goal scorers, Wayne Rooney and Robin Van Persie, side-by-side at Old Trafford in the coming season. Between them they scored a total of 57 league goals in last year’s title race and many are hoping for a repeat over the next few months.

The signing of RVP signals Manchester United’s determination to wrestle back the Premier League trophy from neighbours Manchester City. But it’s Arsenal fans who will be wondering how their club can bounce back from losing it’s talismanic captain.

With the start of the 2012/13 Premier League only days away, Arsene Wenger will be hoping that his team can avoid a repeat of the disastrous start to the campaign they suffered in 2011/12 season which included a run of poor performances that culminated in the 8-2 thrashing at the hands of Alex Ferguson.

News of the RVP signing was quickly reflected by the bookies who cut United’s odds on winning the league. No doubt Van Persie will be hoping he can emulate the success of striker Teddy Sheringham, who left the capital to join United in June 1997 and went on to win the triple in 1999.

You can view Premier League outright winners odds below. However, you’d need to be a brave man to bet against Alex making it title number 20!