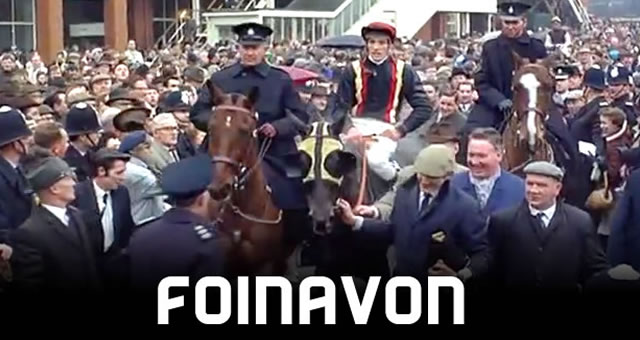 Foinavon was the shock winner of the 1967 National when a mass pile-up at the 23rd fence meant that he was the only horse to come out well. On the day of the race, he was a 100-1 outsider but the day before he had a 500-1 chance! In fact, so bad were his chances that neither his owner or trainer actually attended Aintree on the day to see him race – and if the trainer and the owner don’t believe in you then who is going to?

The general consensus of Foinavon’s poor status was summed up by Daily Express tipster Charles Benson who said at the time: ‘Not the boldest of jumpers, he can be safely ignored, even in a race noted for shocks.’ You can imagine the payouts for those who were crazy (or inspired) enough to bet on him. Coming home a winner by fifteen lengths, his success paid out a record 444-1 on the Tote.

Foinavon’s win was a prime example of how the Grand National can throw up the unexpected. Things had been pretty plain sailing for more than the first half of the race. More than thirty of the forty-four runners got past the second Becher’s (an accident blackspot if ever there was one). The next fence, the smallest on the course at just four foot six, is where things went wrong for the majority of the competitors. All of them went down except for Foinavon because he was so far behind the rest of the field.

The pile-up and mayhem was due to runner call Popham Down. He had been riderless since the first fence and he refused the jump and instead stopped dead to rights in front of the fence. That meant all the subsequent horses ended up crashing into each other. In fact most of the runners ended up flinging their jockey’s over the fence instead. In the words of Lord Oaksey (then rider John Lawrence) Popham Down had:‘cut down the leaders like a row of thistles.’

Ridden by John Buckingham, Foinavon had, prior to the pandemonium been a hundred yards behind the leaders. Upon seeing the chaos ahead, Buckingham managed to steer wide to the outside and, through a gap between loose horses, cleared the fence at the first attempt. This gave him a clear hundred-yard advantage of the seventeen jockeys that managed to re-mount and remain in pursuit. All to no avail though. Destiny had taken over and Foinavon won comfortably from Honey End, the 15-2 favourite and Red Alligator, who won the race the following year, finished third.

While some condemned the 1967 race as being a farce, the nature of the race – sensational, exciting and injury-free – instilled newfound respect. It also created demand to ‘save the National’, which was much needed given that at the time Aintree was under threat of sale for building development.

Perhaps unsurprisingly Foinavon did not go on to win another National. But he did have another freak win at Uttoxeter in October 1968. He trailed home alone after another loose horse brought down the race leader and caused the only other runner to be carried out. Dubbed ‘the National’s luckiest winner’ Foinavon remains legendary at Aintree. The four foot six fence after Becher’s Brook, where the pile-up of horses occurred following Popham Down’s cut through, is now named after him.

Author David Owen managed to eloquently sum up that great day and indeed the story of Foinavon’s life in his book Foinavon: The Story of the Grand National’s Biggest Upset. It is published by Wisden Sports Writing and has received rave reviews for its original, detailed and insightful view of race.

The book is based on original interviews with people who were at Aintree that day and those whose lives were touched or changed by that memorable win. He also explores just why the Grand National holds a worldwide viewing audience of nearly 600 million people spellbound, year after year, for ten minutes on a Saturday afternoon in April.

The Grand National 2021 will take place on Saturday, April 10th at Aintree Racecourse. Tune into ITV for all the live-action in the UK.

The Real Value Of An Honest Online Casino Review

Past Masters of the Grand National
Scroll to top