Now that the Cheltenham Festival has come to an end, the Grand National is just around the corner. So it is the perfect time to discuss two of the most popular horse racing events in the world. And to highlight the achievements of one of the best jumps jockey.

The 12th March marked the beginning of the Cheltenham Festival. It is undoubtedly one of the highlights of the National Hunt calendar along with the Grand National. The festival takes place at Cheltenham Racecourse and features several Grade 1 races with the biggest being the Gold Cup.

Hundreds of millions of pounds are bet over the course of the Festival. So if you do fancy a punt it is a perfect opportunity to bet on National Hunt racing. You will have to wait until next year although some bookmakers are already offering ante-post odds on the biggest races.

A tiny bit of history was created at this year’s festival. The great horse trainer, Willie Mullins finally added a Gold Cup to his crown. His horse, the 12-1 chance ‘Al Boum Photo’ ensured that Mullins’ long wait for the Gold Cup was not in vain.

The Grand National is the pinnacle in the British and Irish horse racing calendar. Held at the Aintree racecourse in Liverpool, it is a steeplechase almost over 6km long with horses jumping 30 fences over the course of two laps. The race is highly prominent in British culture and is popular throughout the UK with many people who do not usually bet or watch horse racing at any other time in the year. An estimated 500 to 600 million people watch the Grand National every year in over 140 countries.

The event has been called the ‘Ultimate test of horse and rider’ due to the much larger fences than are usually found on a National Hunt track. Becher’s Brook, The Chair and Canal Turn are fence names that have become famous due to their complexity. The run-in to the finishing post is 452m long and is one of the longest in the country. It is on this run-in where many potential winners of the Grand national have had victory snatched away from them.

However, it is likely the odds on a lot of horses will become shorter as the event draws nearer, especially as horses improve in the events that run up to the Grand National.

Peter Scudamore is one of the best-known jump-jockeys of all time. Scudamore rode 1,678 winners in an illustrious 15-year riding career. He broke many records during his career and won 13 times at the Cheltenham Festival, although he never won a Gold Cup or a Grand National.

Although they have now both been broken, Scudamore set the record for most winners in a season (221) as well as the record for all-time career winners (1,678). His father, Michael Scudamore, was also a successful jump jockey and trainer whilst Peter’s son, Tom Scudamore, is also a professional jockey.

Since he retired, Peter Scudamore has pursued a career in the media. He regularly features as a pundit for British television channels and has a column in one British national newspaper where he gives his opinions and tips on the races. Peter Scudamore has recently teamed up with NetEnt, an online games development company who have released an online slots game in the UK named Scudamore’s Super Stakes.

“Scudamore’s Super Stakes looks like being one of the most exciting as well as one of the most popular games of 2019,” says Sebastian Lindt from online casino operator PlayFrank.

“Coinciding with the National Hunt horse racing season, Netent picked a perfect time to release this game. Peter Scudamore is a legend of the sport and I am sure horse racing fans are going to love Scudamore’s Super Stakes.”

Scudamore was a pioneer of National Hunt Racing. His legacy has influenced many-a jump jockeys career, including the careers of probably the two greatest ever jump-jockeys – Ruby Walsh and Tony McCoy. 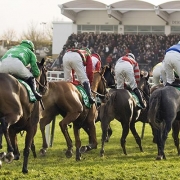 Making The Most of Poker Talk
Scroll to top