Paul Carberry followed in his father’s footsteps when he won the Grand National. His father Tommy had raced to victory in 1975 on L’Escargot when Paul was a mere fourteen months old.

Paul repeated that famous feat on Bobbyjo in 1999. In doing so he became the first son of a Grand National winner to emulate his father in the greatest of the steeplechase races.

It almost got even better – Paul’s grandfather (on his mother’s side) missed out on winning the Grand National, by just a head, on Royal Danieli in 1938.

Carberry’s first introduction to the Aintree racecourse was when he was still a schoolboy of 16. He rode Joseph Knibb in the Fox Hunters Chase, where he had a horrific fall at the seventh fence. So bad was the fall, that is was decided that he should forget about racing at Aintree for a few years.

At the age of 18, he joined the stable of Noel Meade. Noel is one of the most successful Irish trainers of all time and Carberry won on his first ride at Cheltenham.

In 1994, at the tender age of 20, Carberry rode in the Grand National but was unseated at the 27th fence from Rust Never Sleeps. But two years later scored his first Aintree victory in the John Hughes Memorial Chase on Joe White. In 1997 he reached fourth place in the National on Buckboard Bounce.

With a bit of a reputation as a reveler, J.P. McManus once bet him £50,000 that he couldn’t stop drinking for a year. He won the bet but refused the double sum offered to do it for another year! His ability to paint the town red (his nickname was ‘Alice’ after his favorite party piece ‘Living next door to Alice’) never took from his ability in the saddle.

Having won the 1998 Irish Grand National on Bobbyjo, a horse trained by his father, Carberry was determined that they could pull off the same act for the 1999 Aintree Grand National. He had a once in a lifetime early night and it paid off when he won the race from Blue Charm by ten lengths.

He desperately wanted to do the same thing the following year, but a twenty-pound weight increase on Bobbyjo meant that they finished eleventh. Unfortunately, a year later an injury with fatal consequences left Bobbyjo unable to enter the National at the last minute leaving Carberry without a ride in the National.

At the Cheltenham Festival the following year he won the National Hunt Handicap Chase on Frenchman’s Creek, but a hand injury left him unable to enter the Gold Cup on Marlborough.

Paul Carberry’s racing career so far has included an impressive string of major wins. They include the 2006 Thyestes Chase on Dun Doire and the 2006 Hennessy Cognac Gold Cup on Beef Or Salmon. He also took two wins at the 2006 Cheltenham Festival – the Sun Alliance Novice Hurdle on Nicanor, and the Weatherbys Champion Bumper on Hairy Molly.

At the 2009 Cheltenham Festival, Carberry once again found himself a winner, riding Go Native all the way to first place in the Supreme Novices’ Hurdle.

His success at Cheltenham carried on with a win in the Johnny Henderson Grand Annual Chase on Bellvano in 2012. He then took the World Hurdle the following year on Solwhit. But his final win at Cheltenham was in the Spa’ Novices Hurdle on Very Wood in 2014.

Never shy of big races, Paul Carberry was back in the winning enclosure at the Welsh National at Chepstow in 2013. Carberry was a late choice to ride the horse Monbeg Dude and was running at 10/1 odds on the day.

But he went out and rode the perfect race, sitting right at the back of the race. He moved up the field to meet AP McCoy at the last hurdle. In an epic battle to the line, Paul Carberry beat the favorite Teaforthree ridden by McCoy by half a length. It’s fair to say that Carberry displayed all of his genius in this race and it has been listed in the top five jump races on numerous occasions.

After a spectacular career, Paul Carberry sadly announced his retirement in 2016. This was due to a long struggle with a leg injury that he picked up in 2015.

On top of all this racing success, Paul Carberry is quite a talented clothing designer. Apparently, the idea came about when Joules Lamb observed the vast amounts of jackets needed to do the job. When Joules asked Paul if one jacket could be designed that could do the job of the lot, his response was yes.

So the PC Jacket was the start of a new direction. This followed with them expanding into more and more items ultimately becoming PC Racewear and racing equipment.

It’s fair to say that PC Racewear is incredibly popular, so it turns out that the little spark of an idea has turned out perfect for Paul Carberry.

If you fancy having a bet on this year’s Grand National then try Paddy Power Bookmakers. 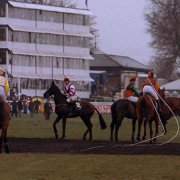