Cheltenham Racecourse is located near Cheltenham Spa in Gloucestershire, England, in the suburban village of Prestbury. Cheltenham is regarded as the ‘Home of National Hunt racing’ and the festival is one of the most prestigious in the world.

The four day Cheltenham Festival is held in March each year and features the famous Cheltenham Gold Cup. The racecourse itself is located just below the Cotswold Hills, at Cleeve Hill and can hold 67,500 spectators.

Memories to last a lifetime…

Shall we do it all again next year? ?#CheltenhamFestival pic.twitter.com/fPJn1jiUsg

Hurdle races over two miles on the New Course also have a slight peculiarity in that most of the hurdles are jumped early on in the race with only two hurdles being jumped in the last seven furlongs.

The third course is a cross-country course that is laid out inside the main racecourse.

There are three enclosures at Cheltenham. The first is the Sun’s Best Mate Enclosure which is directly opposite the main stands. Being so close to the main stands give a great view of the racing. There is a great choice of foods and betting facilities and bars, while ‘cover’ bands provide musical entertainment.

The Tattersalls Enclosure is extended for the Festival to include the Guinness village. This provides extra viewing steps as well as additional bars, bands and other forms of entertainment.

The Tattersalls gives access to all the bookmakers in the betting ring, as well as to The Centaur, Paddock and unsaddling enclosure. On top of this, you will see the Hall of Fame, the Gold Cup and Festival Restaurants. A Club Day badge for The Festival entitles you to use all the facilities within the Tattersalls enclosure.

The Centaur is one of the largest auditoria in South-West England. It holds over one thousand additional seats as well as a big screen to watch all the racing, along with a full range of betting options, food and bars. It also hosts live music after racing at The Festival.

Each Day Of The Festival

The first day of the festival is Champions Day. This is a fantastic day as its the beginning of the festival. It’s known for the Cheltenham roar when the crowd cheers as the first race gets going.

There are four Grade 1 races on the first day with the highlight being the Champion Hurdle. Other big races on the card include The Arkle, The Mares Hurdle, and The Supreme Novices’.

Wednesday is known as Ladies Day at the Cheltenham Festival. Expect plenty of beautiful outfits and hats as the ladies compete in the style awards for the best-dressed woman of the day.

The main race of the day is the Queen Mother Champion Chase. This race has been made famous over the past couple of years by the fantastic Altior. On top of this, there is also Ballymore Novices’ Hurdle, RSA Insurance Novices’ Chase and Weatherbys Champion Jumper, which are all Grade 1.

On the third day, the Irish take over the festival with St Patricks Thursday. This is a great day with a fantastic atmosphere. You’ll find the Guinness tent busier than ever! The Paddy Power Stayers Hurdle is the highlight of the day alongside the two Grade 1 races – the JLT Novices’ and The Ryanair Chase.

The final day is the big one, Gold Cup Day. The Gold Cup is the biggest race of the whole week and it takes place at 3:30 pm. One of the biggest races’ in the racing calendar, the horses that win it go down in Cheltenham history. On top of this, there is the JCB Triumph Hurdle and Albert Bartlett Novices Hurdle, which are both also Grade 1.

These aren’t the only races though, there are in total 28 races over the four days!

Have fun at your first Cheltenham Festival, we guarantee it won’t be your last! 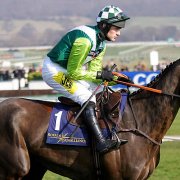 Highest Paid Footballers In The World