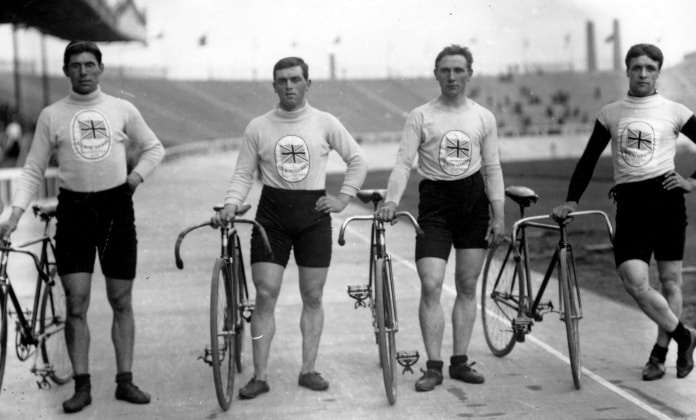 The Olympic Games, always a sensational spectacle but so often plagued by political complications, financial concerns, dubious corporate sponsorship, drug scandals, even the odd display of bad sportsmanship; and it seems that some things never change.

Incredibly though, the 1908 Games actually made a profit Back in 1908, when London hosted the Olympics for the very first time, those self-same elements hung over the games like a cloud – and to make things worse it rained continually, making them the wettest Games on record! Even so, Great Britain came first with an amazing 146 medals – 39 bronzes, 51 silvers, and an incredible 56 golds – not a bad result given that we weren’t even supposed to be staging them.

The Fourth Olympiad, the first recognisably modern Games was hastily hosted by London; and it was a volcanic eruption that gave London its chance. When Mount Vesuvius erupted on 7th April 1906, destroying much of Naples, Italy pulled out as host and diverted all available funds to the reconstruction of the devastated city. London had been just beaten for selection by Rome giving themselves the seemingly impossible task of having just 10 months to find a site, build a stadium, and organise finance for the Olympiad.

The White City Stadium was built in record time at a cost to the government of about £60,000, a tiny fraction of the cost of the 2012 Olympic Stadium which came in at around £486m. At the time The White City Stadium was ‘state of the art’, holding a huge 68,000 spectators – not so very far from the 80,000 capacity of the 2012 Olympic Stadium. White City was seen as a technological marvel; the stadium track was three laps to the mile, a cycle track included, a pool for swimming and diving, and platforms for wrestling and gymnastics positioned at its centre.

It was all managed on a budget that would just about buy a decent family car today. The 1908 organising committee showed a cost of just £15,000 (excluding the building of The White City); with over one-third of the cost labelled “entertainment expense”. Donations and sponsorship were the major source of revenue. All a far cry from the 2012 organising committee’s budget of £2.4 billion, later revised to £3.3 billion and, although the real cost is still unclear, the BBC has reported costs of £9 billion and other sources an astronomical £24 billion.

In ticket sales terms, and despite the rumpus around slow sales and empty seats, the 2012 organising committee is expecting to receive between £375-400m from spectator sales; rather more than the paltry £6,000 which came from ticket sales back in 1908. Incredibly though, the 1908 Games actually made a profit and a total value of receipts of £21,377 was reported. Just what 2012 will eventually cost is anybody’s guess, but a measurable financial profit isn’t expected.

We’ve become used to Olympic problems and debate, from terrorism and security issues to failed drugs tests and even gender issues. Back in 1908, sportsmanship was the name of the game; but even so, the Games were full of dispute and controversy.

This was the Games where the modern distance of the Marathon was established. The original distance of 25 miles was changed to 26 miles so that the marathon could start at Windsor Castle and finish at White City. It was then changed again at the request of Princess Mary and extended by a further .2 of a mile, just so the start would be directly beneath the windows of the Royal Nursery.

This was the games where marathon runner, Dorando Pietri of Italy, staggered into the packed stadium, took a wrong turn, collapsed, was helped up by doctors, wobbled and fell three more times before being half-carried across the finish line by race officials and Sir Arthur Conan-Doyle – creator of Sherlock Holmes. Pieti was later disqualified, partly because it came to light he’d been drinking brandy en-route, and the gold was instead awarded to America’s Johhny Hayes – but only after fights had broken out in the stands.

This was the Games that became known as “The Battle of Shepherds Bush” with the British and American’s in continual disagreement. This culminated when the U.S. delegation noticed that there was no American flag flying alongside the other national flags at the stadium. In response, U.S. flag bearer and discus champion, Martin Sheridan, refused to dip the Stars and Stripes when he passed King Edward VII’s box in the opening parade – a tradition that America keep up to this day.

Ireland participated as a separate country for the first time, winning silver medals in both.

This was the games where for the first time competitor’s were required to be registered with their Olympic Association and entered as a member of a national team. What constituted a national team was difficult to define though, and even Britain seemed confused by its identity. Fearing an Irish boycott by athletes, many of who wanted to compete separately despite Ireland being part of the UK at the time, the authorities changed the name of the British team to Great Britain/Ireland. Even so, in two sports – field hockey and polo – Ireland participated as a separate country for the first time, winning silver medals in both.

This was the Games where qualifying standards were laid down for the first time, and a set of rules for each of the sports was agreed by the majority of the competing nations. Despite this, there was still controversy surrounding the 400-meter final heat. With only four runners in the field, the British officials accused American runner, J.C. Carpenter of blocking and elbowing British runner Wyndham Halswelle. The race was ordered to be rerun, but since all three American runners refused to redo the race, Halswelle ran the race on his own – going on to win gold obviously.

Incident after incident ensued. The steep-sided cycling track annoyed the French and Canadians, the refereeing in the wrestling made Sweden angry, and in another alcohol-related argument, Canadian marathon runner, Tom Longboat, collapsed after 19 miles, possibly as a result of the champagne his assistants gave him as he ran. The Canadians claimed that he had been drugged, the British that he was legless, and the Americans joined in just to add to their average of one official protest per day, ranging from too-long running shorts to the ban on having coaches on the field.

Despite all of this, the 1908 Games were much better organized than the previous Olympics and the very first to have an opening ceremony. Danny Boyle’s 2012 celebration of Great Britain is arguably one of the most entertaining opening ceremonies ever and his controversial extravaganza is rumoured to have cost a cool £25m. Back in 1908 the opening ceremony cost almost nothing, consisting of athletes marching into the stadium behind their nations’ flags; and even the flags were brought from their home countries. Only Finland marched without a flag as they refused to march under the Russian flag as required by their enforced ruler the Tsar.

In 2012 there were 26 sports represented in the Games. In 1908 almost as many sports were represented with 22 different categories. Many of the sports were representative of the times – much as Women Boxing and BMX is representative of 21st-century sports. Back in 1908 sports included: The Tug Of War, Running Deer Shooting, Standing Start High, Long, and Triple Jump, Tandem Cycle Racing, Bicycle Polo, and an International Fly Fishing contest which was held in the Olympic pool.

The sports gear worn by athletes was also very different. Of course, there were no man-made fabrics, so no Lycra and Teflon coated materials; cotton, natural rubber, leather, canvas and wood were the order of the day. And of course, modesty and propriety were paramount, so no figure-hugging, revealing costumes. Men played tennis in long white flannels, swam in one piece coverall costumes, marathon runners ran in sturdy leather boots, and lady archers wore long-sleeved blouses, skirts full to the ground, and dress hats.

1908 was no different in most ways to today’s Games. It may have taken six months to fully complete; and there may have been no China, South Korea, or any of the African nations (apart from South Africa, who were under the British flag anyway) to beat. But it was a success, it did make a profit, and it became the Games that laid the foundation of the Games as we know them today. 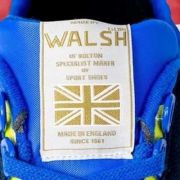 Can USA Improve Perception Of Paralympics? 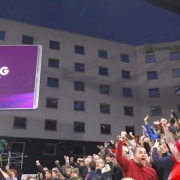