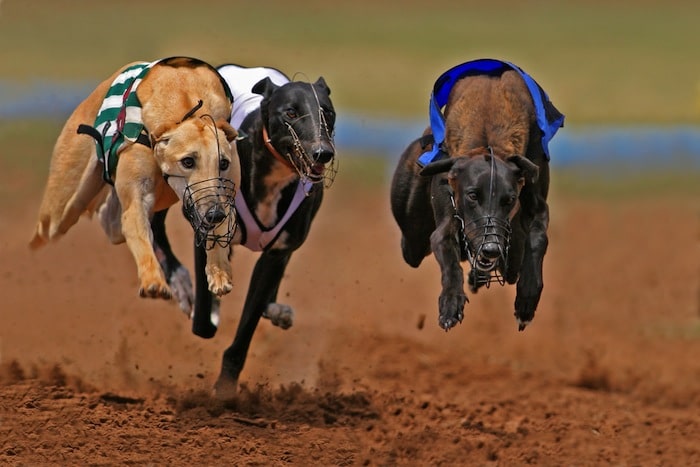 It was once one of the most popular pastimes in the UK with over 34 million paying spectators in 1946 alone. A night at the dogs was for many working men a weekly treat with crowds of up to 50,000 punters regularly descending on London’s White City in the early sixties. At the height of greyhound racing’s popularity, Britain boasted 80 tracks. Today there are only 25 or so remaining with many more considering closure. With audiences at many venues down by more than half in the last five years, things are looking bleak for greyhound racing. So is the finish line in sight, and what has caused what many see as an unstoppable decline?

Greyhound racing has its origins in coursing where dogs were used to hunt small game by sight rather than scent. The first recorded greyhound race was at Hendon in 1876. Initially, races were run on a straight track, but with the invention of an artificial hare in 1912, by American Owen Patrick Smith, greyhound racing as we know it was born. In 1926 it was introduced to Britain when the first British meeting took place at Manchester’s famous Belle Vue Stadium. The sport grew in popularity rapidly, going from strength to strength in cities and towns throughout the UK. By the end of 1927, there were forty tracks operating.

In part it was the urban locations of the tracks and the fact that meetings took place in the evenings that made greyhound racing so popular. Of course, the other key ingredient was betting, and many consider that a change in betting law began the decline. In 1961 off-course betting shops were legalised. Prior to this, the only legitimate means of having cash bets was by going to a bookie at a racecourse. This applied to both horses as well as dogs. Of course, this change meant that there was no longer any absolute need to go to the track to have a flutter, and audiences began to dwindle. This situation was made worse in 1993 when betting shops were allowed to extend their opening hours into the evening dog racing slot.

According to the Greyhound Board of Great Britain (GBGB), another big factor in the ever-increasing speed of decline is the popularity of online betting. They claim that the sheer scale and variety of online betting has led to lowered attendances at all racing meets, but particularly greyhound racing. With greyhound racing live-streamed online there’s less reason to attend a real track. There are even virtual online greyhound races and games available – who needs the effort of going to a cold, wet dog track when you can get all the excitement of the race and have a flutter from the comfort of your armchair?

It seems that the greyhound industry has unwittingly helped along with its own demise, and the very things that once made it so successful are now working against it. At its inception, the easy to get to, inner-city locations of the stadiums were an asset to the sport. Today it is one of the industry’s biggest threats. With the increasing value and scarcity of prime inner-city plots, greyhound stadiums, along with many other sports venues, are prey to the developers. Tracks at Portsmouth, Reading, Milton Keynes and Oxford have all closed recently following falling profits, attendances and huge development offers. Portsmouth, which opened in 1936 and closed in 2010, is being redeveloped to include 1,200 homes and a business park.

There used to be 25 very busy tracks in London, but now that’s down to only one in Wimbledon. East London’s famous Walthamstow Stadium was turned into a development goldmine when a scheme to build more than 300 flats and a leisure complex on the site was approved. Oxford, a viable stadium until about 5 years ago, recently lost its long battle to stay open. Former greyhound commentator and race manager Mick Wheble, said: “It’s simply a question of economics, now there’s just not enough money in it,” Mick, who was awarded an MBE for services to greyhound racing, went on to say: “Oxford was probably the most modern track in the Thames Valley, the cost of going went up, numbers slid down and then dwindled away.”

Unsurprisingly cost is another issue. There simply isn’t enough profit in it any more, and the once cheap night out at the dogs is no longer cheap for many people. New legislation, bringing expensive new procedures and rules and soaring vets fees, is at the very heart of the matter. Then there’s the anti-greyhound racing lobby who claim that greyhound racing is cruel and retired dogs are killed rather than re-homed as family pets. All this alongside a reliance on the ever-diminishing Bookmakers Afternoon Greyhound Service (Bags), started in 1967. With around 70 Bags races staged each day in stadiums for the betting shops and the internet, Bags has been crucial to the sport’s survival. Add an escalating drop-out rate for trainers, too many dogs, a lack of interest from the young, a ‘tacky’ reputation with the public generally, and the whole thing begins to look tired and dog-eared.

It seems that greyhound racing is just about hanging in there. It’s still the fourth most attended spectator sport after football, horse racing and rugby; there’s increased advertising in the media; all kinds of offers including free drinks, free racecards, even free meals; and any number of special deals for corporate, stag, hen, and party entertaining.

There are pockets of renewed hope for this once great spectator pastime. Coventry Stadium reopened recently and Towcester Racecourse is developing a greyhound circuit to run inside its horseracing track with races broadcast around the globe. In Sheffield, Owlerton Greyhound Stadium is thriving. The stadium, opened in 1926, underwent a re-fit in 2010 including the addition of a casino and the construction of a £1.6m panoramic restaurant.

The Greyhound Board of Great Britain says that it was now up to the sport’s managers to find a way to adapt to new audiences whilst continuing to cater to established supporters. “There is no doubt that greyhound racing is facing many challenges and, sadly more track closures are probably inevitable,” said Jonathan Kay from GBGB. Even so, he remains cautiously optimistic about the future of greyhound racing in the UK, saying: “I certainly do not think it is in terminal decline.”

Manchester’s Belle Vue, the home of British greyhound racing, is still going strong. Who knows, it might still be around in 2026 to hold the 100th-anniversary greyhound racing meet.

Industry Transformed By The Internet
Scroll to top