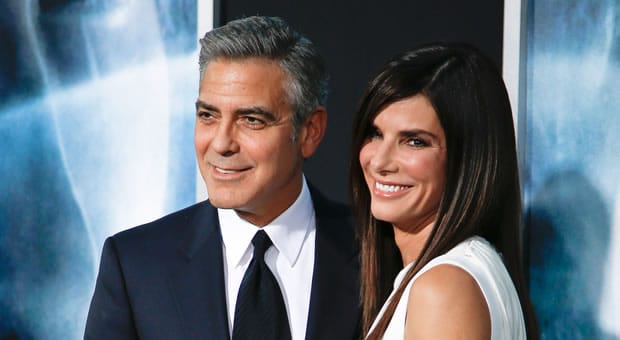 It’s that time of the year when most of us are preoccupied with who gets what for Christmas and how on earth we’re going to pay the winter fuel bill! Don’t get bogged down too much by real life, when there are some really frothy upcoming events you should be considering, like the 2013 Oscar nominations, will be revealed on Sunday 1st December.

Film buffs are already convinced it will be a two-horse race this year for the Best Picture category and slugging it out will be the technologically brilliant ‘Gravity’ and ’12 Years a Slave’. Gravity was the toast of the Venice and Telluride film festivals and is directed by Alfonso Cuaron who Paddy Power Bookmakers have at 3/1 for the Best Director award.

Gorgeous George Clooney is currently 25/1 for Best Actor nod and stars as veteran astronaut Matt Kowalski alongside Sandra Bullock (5/1 for Best Actress) who stars as Dr Ryan Stone, embarking on her first space mission. The film had an impressive production budget of $100 million and to date is close to taking almost $500m at the box office.

Gravity has been well received by critics and audiences alike with the thrilling visual effects, acting and cinematography drawing the highest praise. In a recent interview, real-life Nasa astronaut Tom Jones said, “I have seen Gravity twice. I enjoyed it just as much the second time, picking up many more details of the movie and sizing it up for accuracy. Its survival story is compelling and is a visual treat.

“I truly enjoyed the ride that Gravity provided. I laughed at the mistakes and shortcuts with physics, but it didn’t detract from the excitement and suspense of the movie for me”.

The rival movie couldn’t be more different. The gritty ’12 Years a Slave’ is based on the autobiography of Solomon Northup, a free black man who was kidnapped in Washington DC in 1841 and sold into slavery.

The film is directed by Steve McQueen, 6/5 at Paddy Power bookmakers for Best Director, with a screenplay by John Ridley. Released in the States in October it will not be seen in the UK until 24th January 2014 and stars Chiwetel Ejiofor [(6/4 Best Actor), Brad Pitt, Ireland’s Michael Fassbender (20/1 Best Actor), Lupita Nyong’o and Benedict Cumberbatch.

To keep within the $20 million budget, much of the filming took place around the New Orleans area and our historic antebellum plantations were featured, one very close to the actual location Northup found himself in.

It premiered at the Telluride and Toronto film festivals winning much critical acclaim with the acting and faithfulness to the original autobiography particularly praised. It portrays the racism and brutality endured by the slaves with gritty and brutal realism that many will find uncomfortable viewing.

The Oscars ceremony will be televised live to over 225 countries and territories, on Sunday, March 2nd 2014, from the Dolby Theatre, Hollywood.

O’Neill and Keane Take Over Ireland