Gaming is bigger than ever, both in terms of overall sales and visibility. This is thanks, in no small part, to what we call eSports – where gaming is taken into the mainstream and hosted on live television and popular streaming services like YouTube and Twitch. Consequently, this has also grown the surrounding infrastructure, even as far as allowing betting like many websites do for traditional sports. This visibility has encouraged many of us to try our hand at the action ourselves, albeit on a smaller scale and with friends. Before we can do this, though, we need to figure out exactly how the professionals do it, and how we can relate that to our eSports tournaments.

Mainstream eSports
The way that eSports tournaments are set up is very similar to the manner in which regular sports tournaments are held – and in more ways than one. Just like with regular sports, the rule set is different for each game, and thus the requirements for each tournament will also change. Just as with traditional sports, planning is key, and an understanding of the essential components of the sport will allow for a much fairer playing field, and one which is better for both the spectators and the players themselves.

Take a game like Valve’s Defence of the Ancients 2, or DOTA2, for short. This game has two teams of five against each other, thus it is necessary for the organizers to ensure that there is a minimum of ten PCs available and that all of these PCs are standardised. What this means is that there must be a default setup for each of these computers with which all of the competitors are familiar. You wouldn’t give a tennis player a half-strung racket, and you wouldn’t give a DOTA 2 player an underpowered computer with a ball-mouse. This is much easier for professionals because they are often sponsored by the likes of YouTube, MeUndies (yes really), Betway, Dunkin Donuts, or Coca-Cola.

As for the degree of standardisation which occurs, there is no definite baseline across all possible games. If we use the previous example of DOTA2, we also know that many pro users bring their own mouse and keyboard so, even though there is a minimum baseline which should not be dropped below, it is usually fair for individuals to bring their own chosen input devices with which they are familiar. This is especially common in fighting games, where there is a wide gap of preference between people who play on a gamepad, and those who play on a fight-stick.

Adjusting To Your Means
While the idea of standardising everything works well for professional settings, it might be a baseline that is somewhat untenable for a real-life group of friends. Not everyone can afford the same thing, and not everyone can transport what they have. There can be any number of obstacles which stand in the way, and in this case, you need to make a decision – will they suffer or will this be part of the game? You should also be sure to remember that, as one of the industries so transformed by the internet, it can be optional to have all players within a single location.

When playing with friends, there will always be the haves and the have-nots but, if you accept this, you can make it part of the experience. We’ve been to casual console tournaments where some of the controllers had issues, thus controller selection was randomized. This can help alleviate the issues if an even playing field is your goal, but it is only one step. You also need to be sure that everyone is running a decent anti-cheat program, as scamming can be common in both online and offline eSports, and that you have a direct and clear code of conduct.

You need to study the rules of the type of tournament which you wish to emulate, adjust it to how many players you have, and work out what sort of layout you will have from there. Some less skilled players might need to be seeded, some of the better players maybe shouldn’t fight each other in the first round, or perhaps you want to introduce a level of total randomness. It’s up to you, and it’s up to how the game is really played. It is also important to note that if you want to take part in larger leagues then you’re going to have to get used to their official rules, so read up and take notes.

The Final Steps
As with any competition, you are going to need a prize. This doesn’t have to be something big or meaningful and probably should remain small until a point at which you are more familiar with how the tournament works. Once you have a few under your belt you might consider expanding, letting others in or reaching out to engage in other regional tournaments. As eSports itself has grown, so too can you.

In fact, some of the biggest tournament in the world like Evo grew from humble beginnings, so there is no telling what your eventual time and effort might accomplish. Just remember – play fair, and don’t be ‘that guy’. 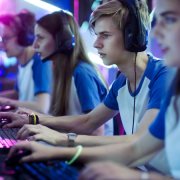