Pamplona is a historic city in the northern region of Spain and this magnificent urban area will provide the location for one of the most exciting and enjoyable games on the internet. Steeped in Spanish traditions, the city of Pamplona is as beautiful a city as you will ever come across on your travels and this game the main focus is one tradition in particular, the art of bullfighting.

Although this is a sport that that has many split opinions, the bullfighting a large part of ancient Spanish heritage and they aren’t really real animals so we should not have to get into the politics of it all, we are mainly focused on the slot game in question, and it is great. IGT have provided us with some of the most enthralling slot games over time and this one proves to be no different, with incredible game engines and massive wins!

The first thing that strikes players is the setting for the game and visuals. You will notice that the game is located inside a historic arena set for a bull ring and the graphics and animations complement the game beautifully. But the real thing that stands out in this game is the exceptional 1024 MultiWays Xtra feature. For players who are unfamiliar with this feature we should explain that there is caution that comes with it… a caution of huge prizes!

The 1024 ways to win is a superb game feature, but with the addition of the MutliWay Xtra engine, it just makes the game a whole lot better. Basically, this feature just means that players have to match symbols starting from the outer reels and land them on adjacent reels as the 1024 ways means no paylines and the MulitWay Xtra means wins pay out from left to right and right to left!

We may be in a bull ring, but the fierce beast is not the only powerful thing in this game. The game also includes a classic Wild Symbol, the ring leader in the game, literally. This special symbol will appear on reels 2, 3, 4 and 5 and has the ability to substitute for all symbols, except the scatter. These special symbols will also payout double prizes for any combination it appears in!

The last exciting thing about this game is yet another traditional bonus feature, yet it never gets old. Players can win free spins from the El Toro bonus feature when they find 3 scatter symbols in any position on the reels. Players will have their destiny in their hands and can choose which number of free spins and multiplier they wish to play with. Players will have the choice between 5 and 30 free spins and 20x and 3x multiplier. The more free spins you choose the lower the multiplier attached however, so be choosing wisely in this feature and tame the bull inside the ring and you will be onto a huge winner in the Pamplona slot game! 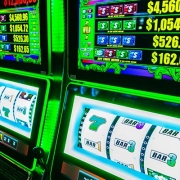