Gala Bingo are now offering their online players the chance to play a scratch card version of ‘Who Wants To Be A Millionaire? one of the most popular quiz shows of all time. Gala are already the number one UK site for bingo and they are constantly reviewing and updating the games their customers can play at home and on their mobiles.

The original version of “Who Wants To Be A Millionaire’ first hit our tv screens on ITV in September 1998. The show was hosted by Chris Tarrant and was an instant hit with the viewing public, the last series finished in February 2014.

By answering a series of twelve increasingly difficult questions, contestants were given the opportunity to win up to one million pounds. The player was presented with a multiple choice of answers and could decide whether to try to answer the question or choose to collect the money they had accumulated.

At the height of it’s popularity the show drew an audience of 19 million, this equates to an amazing one in three of the British population. 81 countries showed versions of ‘Who Wants To Be a Millionaire’, including the US, France, Hong Kong, India, Japan and Peru!

Fortunately the scratch card version of the show offers players the opportunity to win up to £1,000,000, without the need to answer the tricky questions that were a feature of the tv show.

Just choose your stake and you will be presented with eleven panels to ‘scratch’, under each panel lies a Who Wants To Be A Millionaire themed symbol. If you manage to scratch three matching symbols you win yourself a cash prize.

A nice feature of this scratch card is the bonus game, if you reveal three bonus symbols you will automatically be entered in to this round. The bonus game starts at the bottom of the ‘Who Wants To Be A Millionaire’ money tree, your object here is to ‘climb’ the money tree one step at a time by using the hit button on the step which is highlighted.

The Who Wants To Be A Millionaire scratch card joins a long list of themed ‘scratchies’ and should prove popular with fans of the show. The ‘bonus round’ will also appeal to players looking for a big win, without the need to answer those difficult questions. 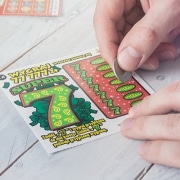 How To Play Online Scratchcard Games